I thought I'd share these photos of a couple of my canine nieces. (Yes, there are others, but I haven't subjected them to the camera yet.) This is my brother's dog, Shingles. He's a roofer, thus the name, in case anyone was thinking "Ewwwww!" She seems to really enjoy romping in the cold, white stuff. 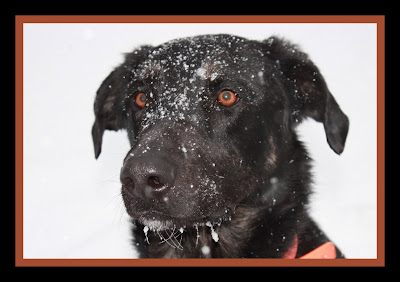 Below, is Joey, my sister's dog. I've blogged about her before. She has an endless array of facial expressions which makes her a really fun subject to photograph. Aren't they cute? 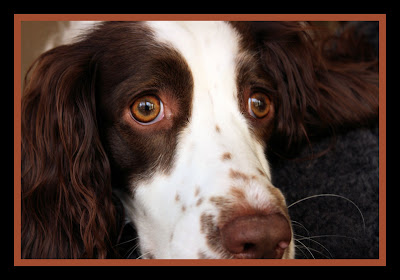 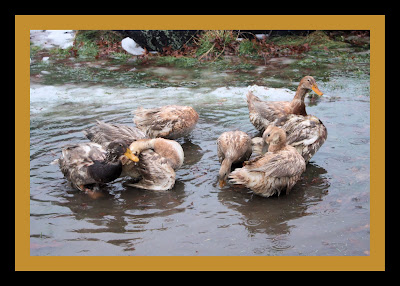 Yesterday we had an unusual warm-up. Temps in the upper 50's and a lot of rain melted nearly all the snow and ice. However, the ground is still frozen solid so all that water just pooled up all over the yard. Since all the frozen horse poop was also thawing, I took the opportunity to shovel the softened piles out from under the overhang of the barn. While I was outside, I let the ducks out to play too. They had so much fun in this puddle/pond outside the barn door. All the splashing and quacking reminded me of the kiddie pool at a water park.
I'm heading outside to do my morning chores now. Since the temps are back to being below freezing, I'm guessing all the various puddles are now frozen over. Wish I had some ice skates. I think I might need them!
Posted by Angie Litterst at 12/28/2008 08:31:00 AM No comments:

Got The Tree Up!

Putting up our tree this year had been postponed. We've been planning to paint the living room since we moved here, but recently got serious about it and picked out our paint color and everything. I really didn't want to put the tree up until it was done because I knew it would delay the painting project by several weeks if we had to wait until it came down. The kids were complaining though. Actually, that's an understatement. They were close to rioting. They were not happy that the tree wasn't up. So the other day, we compromised and painted the half of the living room that we put the tree in, and now we can get the other half painted between Christmas and New Year's. 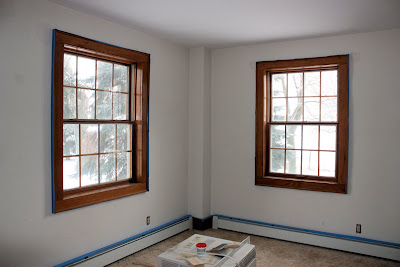 (Before) The room had been just white, and we wanted to warm it up. So we chose a brownish shade of paint. We also removed a ceiling fan and installed a new light fixture. The room seems so much bigger now without that ceiling fan hanging down. 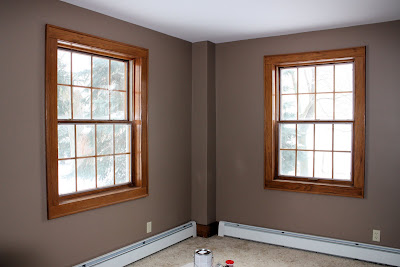 (After) What do you think? This is not all we plan to do with the living room, but it's a start. Eventually, we want to put tile around the front door entry area and get new carpet as well. 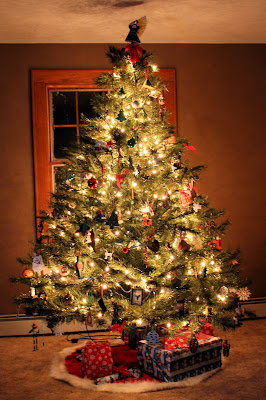 Most importantly, the kids were able to put the tree up, and there can now be peace on earth - or at least peace in my own little world.

By the way, we did NOT need the generator last week. PHEW! We got much less icing than they had originally thought and never lost power. Yahoo!! However, the weather has still been really ugly. We've had wind, freezing rain, snow, extremely bitter cold, more wind, drifting snow, and for the foreseeable future, nothing but more of the same. Remember how I commented on the horrible job they are doing this year of clearing our road? Well, they are not improving. We've now encountered some "firsts" since moving here. They have not picked up our garbage or delivered our newspaper due to the condition of our road, and Dave ended up stuck in a drift on his way to work yesterday. Fortunately, he managed to finagle his way out and did eventually get there since he had the truck, but there's no way he'd have even gotten past our driveway in one of our cars. Winter, winter... isn't it a joy? And it's only just begun! Yippee.

My hatred of winter is not subsiding - not even a little bit. Due to budget issues, nearly all area road crews have cut back on both plowing and salting roads. In previous years, I had been extremely impressed with the plowing done by our township. We live out here in the boonies and still, the plows started running when the snowflakes began falling and didn't stop until the snow quit drifting. A plow would pass our house at least every couple of hours. This year? Well, lets just say they've done a 180. In fact, we got about 5 inches of snow yesterday. I barely made it home from town yesterday in our Toyota Corolla at around 3:45, and only about 3 inches were on the ground at that time. So far, a plow has still not come through. I couldn't leave the house if I had to. Dave took the old truck, and with the 4-wheel drive, had no problem. However, that leaves me to choose between the Corolla and a Honda Civic. Hmmmm... I think I'll just stay home, thanks. If one of the kids gets sick at school or something, well... I might have to hook a sled to Crumb and go get them I guess. Even in town, the roads are terrible. Two days after snowfall, major intersections were nothing but ice. Hills were ridiculously difficult to drive up. Time to either raise taxes a bit, cut back on something a little less life-threatening, or here's a thought, at least for our township: How 'bout not mowing our ditches every other week in the summer? Put the gas savings towards winter plowing and salting. See, grass in the ditches isn't going to harm or kill anyone, but these icy, snowy roads just might.
Next winter ranting? How about this forecast for tomorrow:

If you can not read it, it says big, nasty, ICE STORM! AGAIN! What is going on around here? Up until the past couple years, I only remember one semi-serious ice storm ever in my lifetime, and I'm quickly approaching the four decade mark. Growing up, I never remember the power being out for more than 24 hours for anything. Lately, we've had these crazy weather events causing outages of several days. Out here, no power means no water, which means no toilet (GROSS!) and worse, no water for the animals. Do you know how much water all these animals drink? In the past, I have had to take several 5 gallon jugs, drive to somewhere that has power, fill them, and then haul them out to the animals. This takes a lot of water and many trips back and forth. Since Dave works for the power company and is usually working during these lovely events, I generally find myself doing this alone. Can you say NOT FUN?! Factor in my bad back and the weight of those 5 gallon jugs, imagine trying to juggle them in ice and snow, then add freezing temps on top of it all and I just want to cry. So, as you might understand, this forecast brought me to near-panic mode. This resulted in the unplanned purchase of this little beauty: 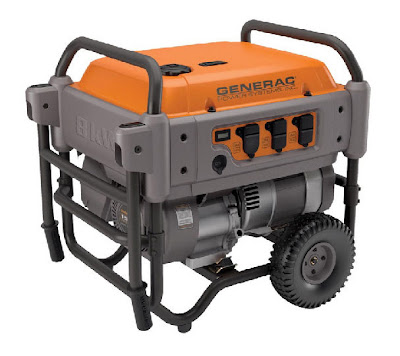 I'm hoping Murphy's Law comes through for us here, and that now that we've spent the money on it, we will never need it. Not the cheapest insurance policy, but if it works, it will be worth every penny! 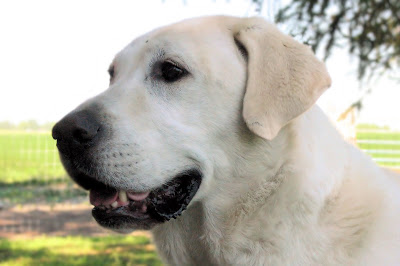 Look at this sweet guy! When we found out we were moving to the country, Dave insisted that he wanted to pick out his ideal farm dog. He wanted a very light, almost white, yellow lab, and he isn't a fan of the narrower, dainty-headed labs. He likes the big, muscular and more block-headed type. So a week or two before we moved, we started calling and visiting the shelters, but we just weren't finding what he was looking for. Then one day I called and they said they had just gotten one in that fits the description, but that they needed to hold him a certain period of time (can't remember now, a week or ten days or something) because he had been found out wandering around the countryside and they had to wait to give any previous owners the opportunity to claim him. Also, they wouldn't "hold" him for us. His adoption would be on a first-come basis. So the day he was to become available for adoption, I showed up an hour before they opened and waited. That did the trick and the big goof came home with me. He only stayed with us in town for a day or two, then it was off to the vet clinic for neutering. When we picked him up, we had already moved and he got to come to our new country home.

Of course, anyone who has had a lab will understand this. He wasn't always the ideal farm dog. He was about 18 months old when we adopted him, and he was a wild maniac for a long time. Our yard wasn't fenced at first and he wanted to chase cars. He chewed up everything left within his reach. When the ponies and horses arrived, he ran up and down the fenceline barking like a lunatic and scaring them. He jumped up on everybody and knocked the kids down. He was just a total pain in the butt and had no desire to learn much of anything beyond "sit" - and even that was something he did only when he felt like it. I don't remember exactly when it was that it finally dawned on us that he wasn't like that anymore, but it was several years. I bet he was at least 6 or 7 years old before he finally outgrew puppyhood. Now he's about nine years old and the perfect farm dog. Nearly everything makes him happy. If you want to see him giddy with doggie happiness, just put him in the truck with Dave. Don't tell me that dogs can't smile. Look at this face: 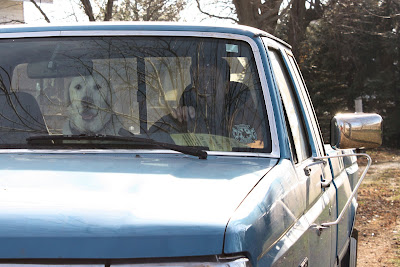 Some Of My Favorite Links